Can One Report Sexual Assault if Covered Under an NDA? 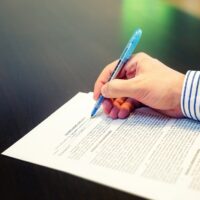 For years, powerful people have avoided consequences after committing sexual harassment and sexual assault by paying off accusers and holding them to non-disclosure agreements (NDAs). Lacking the power or funds to fight a legal battle, many victims felt compelled to agree. Many victims have been bullied into keeping quiet even if the NDA preceded the assault–such as if they entered into an NDA as a condition of employment.

In the modern era, if someone is subject to an NDA, are they allowed to report an instance of sexual assault? Would doing so open them up to significant liability? Was it ever legal to prevent a victim from reporting a crime based on an NDA? Continue reading to learn about NDAs and sexual assault. If you or someone you care about has been the victim of sexual assault or sexual abuse, call a zealous Dallas sexual assault and sexual abuse attorney at the Turley Law Firm for advice and assistance.

Many employers require employees to sign NDAs as a condition of employment. NDAs are not all-encompassing. In order to determine the scope of your NDA, it’s important to review the terms.

Although NDAs differ, at a minimum they should all include certain key terms:

The terms of the NDA dictate how and to what extent the parties are required to remain silent. If there are ambiguities in your NDA, a sexual assault and personal injury lawyer can help you understand your rights.

Can an NDA Stop Me from Reporting Unlawful Activity?

NDA terms may vary from agreement to agreement, but one thing remains constant: An NDA cannot prohibit you from reporting criminal conduct. The government has the absolute authority to enforce the law, and that right cannot be superseded by a private agreement.

If you witnessed or experienced criminal sexual assault, no NDA can stop you from reporting that crime. Courts view it as against public policy and the public interest to prevent someone from reporting a criminal act, regardless of any private contract. If an NDA purports to cover sexual assault and other criminal activity, a court is likely to void that NDA completely should the company try to utilize it to avoid liability, hold a whistleblower liable, or protect the perpetrator of an assault.

If you have concerns about the terms of an NDA you’ve signed, or if you’re not sure whether you will be liable for reporting unlawful conduct you’ve witnessed or experienced, talk to an experienced sexual assault and sexual abuse lawyer.

If you or someone you love was abused as an adult or as a child in Texas, please contact the Turley Law Firm online or call 214-691-4025, or email turley@wturley.com today to schedule your free consultation. Our compassionate Dallas sexual abuse attorneys serve clients throughout Texas and multiple Southern and Southwestern states.