Who Is Liable for a Slip and Fall in a Gas Station? 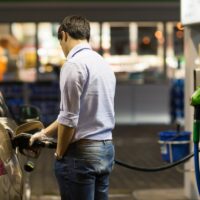 With over 150,000 gas stations across the United States, slip and falls at fueling stations are unfortunately a common occurrence.

A slip and fall at a gas station is just as the name suggests. Slipping and/or falling after walking on an unstable surface can cause severe injury. Likewise, dangerous conditions or preventable hazards can cause an individual to get hurt through no fault of their own.

Common reasons slips and falls may occur include but are not limited to the following:

The legal concept that offers guidance on the liability of slip and falls is known as premises liability.

Under premises liability, businesses including gas stations have a legal obligation to keep their commercial spaces free of any hazards which could harm or injure customers. As with any other retail brick-and-mortar business, gas stations can be liable for a slip and fall in several ways, including but not limited to the following:

When determining whether or not a gas station is liable for a slip and fall, the facts of the case have to be considered on an individual basis. First and foremost, it needs to be determined whether or not the property owner took a reasonable degree of care when assessing and or addressing the hazard. Of course, if a property owner ignored a hazard altogether and failed to fix it, there is a greater likelihood that they will be held liable.

After serving the suit, there are a couple of different outcomes that can occur. One outcome might be the complaint getting settled through a demand letter. In such cases, the named defendants agree to a settlement of sorts, typically a monetary settlement.

In some cases, you may need to go through the legal system in order to reach a conclusion about your case. If your claims prove to be valid, you will typically be awarded damages for both medical bills sustained due to the injury and pain and suffering as a result of the slip and fall.

Depending on the circumstances of a slip and fall, the burden of proof will typically lie with the individual who sustained the slip and fall. Because of this, it’s imperative to document your accident so that you have sufficient proof to argue your case.

If you have access to surveillance footage of your slip and fall, it’s important that you acquire that footage right away. In some cases, contacting law enforcement and having them assist you in obtaining that footage can be invaluable. An attorney can also demand that a party hold onto any potential evidence and not destroy it, such as erasing video footage. Other forms of documentation to support your claims include but are not limited to the following:

When to Seek Legal Guidance

If you have been the victim of a gas station slip and fall injury, you may be entitled to compensation for your pain and suffering, medical expenses, lost wages, and much more. Having an experienced personal injury lawyer on your side can help you put together a solid case when filing your claims. At the Turley Law Firm, our dedicated team will help you get the representation you deserve. Reach out today to speak with someone about your case.