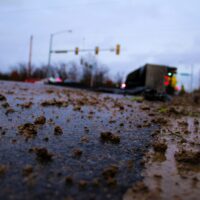 There are few road hazards that are both undeniably visible and catastrophic if ignored. One such hazard is driving with an elevated truck bed.

While it seems like common sense for truckers including drivers of dump trucks not to drive while their bin is still elevated, every year, drivers find themselves in predicaments that can cause significant injury to themselves and others. Take for example a Houston driver who in 2017 captured shocking footage of a construction truck driving underneath a sign trestle while its bin was still elevated. As a result of the lack of clearance, the driver brought down the entire trestle after driving under it.

Why Do Truckers Drive With Elevated Truck Beds?

Driving with an elevated truck bin seems like an obvious hazard to avoid. But unfortunately, some drivers may forget to bring down the truck bin after they’ve raised it. In work environments where a trucker has a very routine and almost monotonous schedule, they can easily dump a load and then forget to bring the bed back down.

In other instances, it might not be the fault of the driver but of the truck itself. On older model trucks, leaking or maladjusted valves can cause the bed to rise very slowly over time. If the driver is on the highway, this slow incline might not be noticeable until it is too late.

In some areas, especially cities, where dump truck drivers have a load quota to reach, they might drive with an elevated truck bed as a way to save time during their route.

Whatever the reason a driver operates a dump truck with an elevated bed, the results will often be catastrophic if an accident occurs.

Why is Driving With an Elevated Truck Bed Dangerous?

If you drive with an elevated truck bed, you open up the opportunity for heightened levels of catastrophic injury. In the insurance world, a catastrophic injury is often described as an injury that happens suddenly, without warning, and brings life-altering and long-term consequences with it. When a dump truck with an elevated bin collides with bridges, power lines, and other structures, the impact can be catastrophic as it can impact a large number of people in severe ways.

Unlike typical automobile accidents where one vehicle may crash into another, incidents involving raised truck beds can be dangerous if not deadly for both the truck driver, other drivers on the road, and even pedestrians.

Every road and highway that has an overpass, bridge, or trestle will often have a sign that stipulates the height clearance. When the bin of a truck is raised, the height of the truck is raised, often significantly. When a driver passes underneath a bridge or overpass, their truck will not clear the height and will instead cause the truck to crash. As with the instance in Houston captured on video, a raised truck bed can bring down raised structures and cause metal poles, shards, and other debris to fly into traffic.

Dangers of elevated truck beds don’t exist just on the roads. The risk for injury also exists when maintenance workers work on trucks while the beds are elevated. An average truck bed and its body frame can weigh up to 4,000 pounds. In instances when maintenance workers position themselves between a raised bed and the bottom frame, unanticipated release or movement of the bed can cause fatalities nearly every time. The Occupational Safety and Health Administration reviewed available data and identified that during the past 10 years, there have been 31 accidents involving unanticipated movement with elevated truck beds. In nearly every case, the accident resulted in a fatality.

If you or someone you love has been injured because of an elevated truck bed, you may be eligible for compensation due to your injuries and pain and suffering. Having an experienced personal injury lawyer by your side can help you build a case against negligent parties in the event of an incident. Contact the Turley Law Firm online or call 214-691-4025 or email turley@wturley.com today to schedule your free consultation. Our dedicated Dallas attorneys serve clients throughout Texas and multiple Southern and Southwestern states.
.